Trending
On the Norwegian the archipelago of Svalbard, where polar bears reign and where dark nights are illuminated by Northern Lights, there is a legend that Santa Claus lives in an abandoned mine under the ice.

Svalbard is one of the closest inhabited areas to the North Pole with a population of almost 3,000.

In the icy tundra, foxes scurry and reindeer graze on the dwarf shrubs of arctic white heather.

People of all ages can drop letters in a red letterbox that stands in front of the mine and addresses the man in red himself.

That Santa is really busy giving gifts in the mine shafts, Svalbard content creator Cecilia Blomdahl says there is an abundance of Christmas magic in the winter city.

“We are above the arctic tree line, so Christmas is magic,” Ms. Blomdahl said.

She has lived in Svalbard for six years and expressed her love for all the traditions that accompany the holiday season on the archipelago.

“We have this incredible tradition in Longyearbyen [one of the main towns on Svalbard]. The whole village is invited to meet in this unique place called Huset. We have torches and we all wear reflective gear, then they turn off the lights all over that part of the village, then we go down to the town square, ”Ms. Blomdahl said.

The procession takes place on the first day of Advent because it is rumored that on that day Santa Claus returns to the mine, according to Ms Blomdahl.

She added that there is also an array of community activities that take place this time of year.

“We have Christmas tables what we call them. So these are Christmas dinners with very specific Norwegian food. So it continues until Christmas,” Ms. Blomdahl said.

“We have Christmas concerts, we have Luciatåg, where there’s a woman with a wreath and lights on it. It’s called the Lucia train. You always did that at school. You do this people train. with different characters, and they sing in different places. “

The temperature in winter can drop to -20 ° C, which means that no trees are growing in Svalbard.

One is placed in the town square of Longyearbyen and is lit for everyone’s enjoyment.

While torches and string lights are used as Christmas decorations, there is a natural light show in the sky that adds even more sparkle to Svalbard.

“I look up and see the sky is green. It was one of the most incredible shows I have seen in years,” Ms. Blomdahl said, recalling a recent night she had. watched the northern lights from her own backyard. .

“Every time it’s beyond me,” she said. 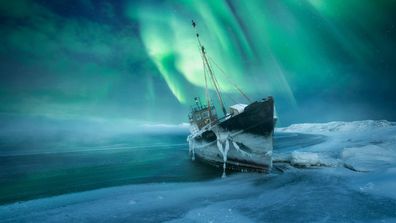 The most dazzling photos of the Northern Lights captured this year

“Anytime you can walk around the village and suddenly you see this little trail of green, and you just know it’s there. Looks like it’s part of our little secret.”